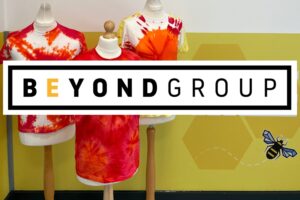 Beyond Group are delighted to support HideOut Youth Zone, which is flying the flag for young Mancunians and the new breed of youth centres.

Launched in Gorton – one of Manchester’s most deprived areas – in 2020, the £6.6 million facility has quickly earned a reputation as a sought-after safe space for local youngsters, many of whom rush to the centre right after they’re done with school.

Beyond Group are supporting HideOutYouth Zone for the next four years as a Founder Patron, making a significant pledge to the young people’s youth Beyond Group are donating their staff time, financial support and partnering support to HideOut. This vital aid helps to ensure that young people from across Manchester continue to have access to new and exciting opportunities as well as important support services.

Matt Fleetwood, Beyond Group Head, said: “We are proud to support HideOut Youth Zone and their vital work in engaging young people across Manchester. As a Group we believe, very strongly, in supporting our community and in particular, young people, and Hideout Youth Zone does valuable work in this area. We are committed to helping them in their continued efforts to improve the lives of those young people.”

Dan, one of HideOut’s young people, says he keeps coming back because the Youth Zone is one of the rare places where he’s given independence: “You can book onto whatever you want – you have your own freedom,” he explained. “In school it’s just maths, English, science, your standard. Whereas here you’ve got cooking, the gym, boxing, football. You can do everything! Even a bit of yoga to relax yourself after a nice footy session. Every Friday we come here and play football with all my mates from the local estate, we grew up together. We come here, get along with the staff and we have a game.”

HideOut cut the ribbon to their youth zone right in the middle of a pandemic – which initially seemed like bad timing. The centre was forced to delay its opening by several months, and even now staff are operating seven days a week under strict COVID protocols.

Adam Farricker, HideOut CEO, said: “To date the team have engaged over 1,500 local children and young people via centre-based support groups, one to one support, weekly welfare calls, digital and online engagement, family food packages and holiday provision for children on free school meals. This is an incredible achievement considering the ever-changing restrictions we have been working through.” Fred Done, one of HideOut’s capital funders, said he had “immense pride” in what the centre had achieved in such a short space of time.  “It started as a dream, and now it’s a dream come true,” he stated.

One year on since HideOut arrived, it’s clear to see the hard work of staff, and philanthropy of supporters, has been worth it. Not only has Gorton’s young community quickly come to understand and appreciate the difference the Youth Zone has made to Manchester – they’re also proud to wear their HideOut badges on their sleeves.

How can you get involved?

As a Founder Patron you will form part of an exclusive family who share a vision to transform the lives of young Mancunians. Founder Patrons offer financial support for up to four years alongside ideas, introductions, time and partnering opportunities. This level of consistent support is critical to the success of the charity and ensures they can provide a first class offer for young people.

HideOut Youth Zone are on the lookout for five more Founder Patrons to meet its annual income targets this year, and would ask anyone interested to get in contact with Richard.driffield@hideoutyouthzone.org.

The Thousand Campaign is a regular giving initiative which supports the youth zones core funding, as well as providing subsidised membership and entrance fees for young people. Individuals or small groups can sign up here and pledge a monthly donation of £66.66 + Gift Aid (which increases your donation by 25% at no extra cost) providing an total annual gift of £1,000 to support the young people of Manchester.

Watch 12 Months, a short film by HideOut about the progress made despite a challenging past year.

You can learn more about HideOut Youth Zone by visiting the official website.