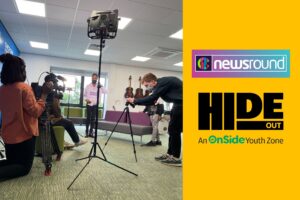 Hundreds of thousands of children in the UK go to youth centres every week. But, there are growing concerns that lots of these centres could close down.

According to figures from the Youth charity YMCA, government funding for youth centres in England and Wales has been cut by £1 billion in the last decade. More than 750 youth centres have had to close in this time and 14,000 youth workers have lost their jobs. It has been two years since the government promised to spend £500 million on youth services, saying the money would go towards building 60 new youth centres.

HideOut Youth Zone in Gorton is part of national charity for young people, OnSide, which has a network of 14 youth centres called Youth Zones supporting over 50,000 young people. The Youth Zones have been built in some of the most vulnerable areas in the UK, where child poverty levels are really high.

Olivia, 13, is one of the children who regularly visits the club.

It’s somewhere to get out the house, a place to meet more people and gives you opportunities that you wouldn’t otherwise be able to do. It enables you to try and find out who you are.

Gorton isn’t the best place to be by yourself, so definitely having somewhere to go gives my parents the reassurance that we’re going to be safe.

When young people aren’t involved in positive activities they are more likely to get exploited and get involved in crime and other illegal activities,” he said.

“By having a centre in the heart of the community that’s open for the amount of hours it’s open, it enables young people to go somewhere and do something good.

Blake, 11, agrees. He has been going to the Youth Zone in Gorton ever since lockdown restrictions were lifted.

It keeps you from being in the wrong group of children who are on bad paths. It gives you something to do and it’s not meeting up with bad people.

“If you see someone who’s not doing something that nice to someone else, you can just tell a member of staff.

If you want to watch the full BBC Newsround segment, watch here.