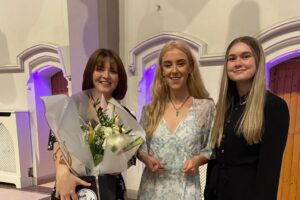 HideOut celebrates a win of three awards within the month of October.

October 2022 saw an abundance of celebration for HideOut Youth Zone as the team celebrated three award wins across the month.

October kicked off with the Spirit of Manchester awards which took place on Thursday 6th October. HideOut was nominated for two awards within the categories: ‘Tackling Inequalities’ for its Sunday Club provision, and ‘Partnership and Collaboration’ for work with Manchester Camerata.

HideOut took home the trophy for the Tackling Inequalities award.

You can catch up on the award ceremony by clicking here.

Following from this win, it was announced on Saturday 8th October at the Manchester Outdoor Education Conference that the Manchester Duke of Edinburgh Award had been presented to HideOut Youth Zone.

To round up the month, HideOut attended the Pride of Gorton awards on Sunday 30th October at Gorton Monastery. HideOut was nominated for Community Group/Team for its work to support local young people in the area.

HideOut was successful in winning this category and was presented with the award by Mayor of Manchester, Donna Ludford.

“What an incredible month it has been for HideOut! It is easy to forget we’re only just in our second year of operations, but the progress we’re making to support young Mancunians is strong. Each award means something special to HideOut, and I am so proud of the exceptional work the team has done to achieve this.”

HideOut officially opened its doors in September 2020, and since this time has supported nearly 6,000 young people.