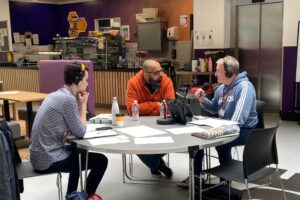 The show, which ran from 10am until 2pm, was a HideOut Youth Zone take-over which offered both members and staff to accompany Sweeney on-air and share stories of HideOut’s creation, development and impact.

“It was great for Mike Sweeney and BBC Radio Manchester to come along to HideOut to check out what we do here. It was even better that Mike gave us the opportunity to share our story with the listeners across Greater Manchester and further afield.”

“That fact our members had the confidence to go live on air to listeners in their thousands and speak so boldly about HideOut in such a positive way was incredible. At HideOut we want young people to believe they are capable of anything, and they really did themselves proud taking part in the show.”

Located on Hyde Road in Gorton, Manchester, HideOut is an independent charity dedicated to supporting young people in the local area to tap into their potential and see a future of opportunity without barriers.

“It’s [HideOut Youth Zone] the most amazing place and I genuinely was gobsmacked when I walked in the door. You need stuff like this in every community because what it provides to young people and their tomorrow […] is incredible”.

The Youth Zone, which opened in September 2020, provides a safe and inspiring place for thousands of young people aged 8 – 19, and up to 25 for those with additional needs, to enjoy their leisure time and take part in over 20 fun and engaging activities ranging from sports, creative arts and employment and enterprise.

You can catch up on the episode via BBC Sounds by clicking here.