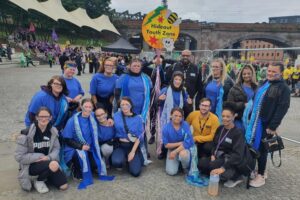 HideOut Youth Zone front the Manchester Day parade as it returns after 3-years.

The Manchester Day parade made its long-awaited return to the city centre on Sunday 19th June, after a three-year hiatus.

Fifteen proud HideOut members took to the streets to represent the Youth Zone and joined over 1,300 other participants in the parade.

With HideOut’s creation in 2020, and the parade having been on intermission since this time, it was HideOut’s first opportunity to experience Manchester Day in full swing as representatives of Team HideOut.

The parade, which started in Deansgate, drew strongly on the idea of Mancunian identity and was themed around Manchester’s young people, in line with Manchester City Council’s ‘2022 Our Year’ campaign.

HideOut had the important role of kicking off the celebrations, leading the parade with the ‘Queen Bee’ float. The float was produced by one of the UK’s foremost outdoor arts companies, ‘Walk the Plank’, and was made primarily of upcycled materials.

Following the parade, celebrations continued in Piccadilly Square which was the events dedicated ‘youth zone’. The zone included live bands, choirs, food stalls, and was a great way for HideOut to meet other youth organisations across the city-region.

“Manchester Day Parade was an amazing day. I enjoyed every bit of it, the atmosphere and crowd were unbelievable! The moment I enjoyed the most was being involved in the walk around Deansgate and being at the front of the parade. I would 100% get involved with it again if I had the opportunity to, I had a great day with my friends and the youth workers”.

To find out more about ‘2022:Our Year’ and how HideOut supports Manchester City Council year of action to support children and young people, head to: https://www.ouryear.uk/