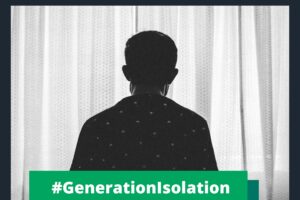 A major new study into the social lives of children and young people aged 11-18 in England published today by the youth charity OnSide, shows that young people in the Northwest are navigating a world outside of school that is increasingly isolated and home-based, with limited opportunities for face-to-face socialising, making new friends or meeting people in person.

HideOut Youth Zone, which is part of OnSide’s network of 14 Youth Zones, has today reacted to the starting findings, calling on more recognition of the vital role of youth centres to give young people opportunities to socialise, make friends and build the valuable life skills that come with real world interaction.

Generation Isolation finds that one in five young people (19%) in England spend most of their free time alone – that’s almost a million young people (988,000) living isolated lives*. In the Northwest, this is lower with 17% spending most of their time on their own.

OnSide’s survey of 5,078 11-to-18 year olds in England published in partnership with YouGov, builds a picture of young people struggling to socialise away from screens with 73% of young people surveyed spending most of their free time on screens (watching streamed content like Netflix/YouTube, gaming, spending time on their phone or watching tv). This is the same in the Northwest.

55% in the Northwest say they are watching more streamed content now than before the Covid-19 lockdown; 35% of young people say they are doing more gaming now than before the Covid-19 pandemic; and 33% are watching more TV now. Computer games is the most time-consuming leisure time activity for young people with 26% spending most of their free time outside school doing this, followed by spending time on their phones (22%) and watching streamed content (20%).

Generation Isolation shows that youth clubs like HideOut Youth Zone play a vital role in enabling young people to build rich social lives, develop skills and build resilience. 84% of young people in the Northwest that currently attend a youth centre say it has made a positive difference on their lives and 71% of that same group say it has given them new skills. Making new friends is the most popular reason for young people to attend youth centres with 27% of people who said that youth centres have had a positive difference on their life citing this. Yet the report also highlights the lack of widespread opportunity to gain these benefits, with just 8% of young people surveyed in the Northwest currently attending a youth centre.

HideOut Youth Zone is joining OnSide, which develops Youth Zones in some of the country’s most disadvantaged areas, in calling for every young person to have access to high quality youth centres to help them build rich social connections, achieve their potential and develop into happy, healthy thriving adults.

HideOut Youth Zone has supported many of the area’s young people to make friends, gain vital youth worker support and to take part in engaging and fun activities.

One such example is Jenifer Thomas, who has been attending HideOut for over a year. When Jenifer joined HideOut, she was very quiet and shy and found it hard to make eye contact when talking to staff and would often have her head down when talking. After several months working with youth workers who encouraged her to try new things, make friends and have general conversations, Jennifer began to grow in confidence. Youth Workers then recognised that Jennifer had and amazing voice and talent for the ukulele and encouraged her to try music producing and recording. Since then, Jenifer has flourished and even took the opportunity to perform in front of 200 people at the Youth Zone. Jenifer has also taken part in Duke of Edinburgh expeditions with twenty other young people, and is now a Young Leader at HideOut.

“Before HideOut, I never spoke to anyone except my five friends and select teachers at school. I was quite quick to judge and was very pessimistic about meeting new people. I’ve made a few more close friends that I trust at Hideout. I also performed at Hideout in front of the whole club for International Women’s Day BY MYSELF.”

Other key Generation Isolation findings for the Northwest include:

“Places like HideOut Youth Zone are pivotal in a young person’s development and future outlook. We give young people something they not only need, but deserve: somewhere to go, something positive to do, and someone trusted to talk to. We believe all young people need is a chance to see what they’ve got, and where it could take them, and we will support young people any way we can in getting them there. It’s about providing young people with opportunities to open new doors, and the empowerment to walk through them with courage and confidence.”

“Too many young people are living isolated lives, increasingly withdrawing into their bedrooms without the support from trusted adults. While online communication is important and has some benefits, its dominance means young people are missing out on the face-to-face interactions that build social skills, confidence, self-esteem, resilience and empathy. We cannot watch an entire generation of young people sleepwalking into social isolation and not develop the qualities that are necessary for mental wellbeing and that lay the foundations for them to thrive into adulthood. With pupils spending 85% of their lives outside of school, the real world has to be as enticing as the virtual one. Youth centres like HideOut Youth Zone are key to that, helping young people develop and build rich social lives, in safe spaces designed to support them.”