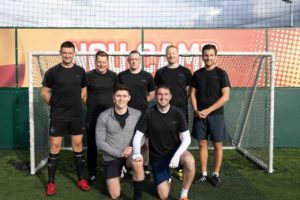 25 teams from businesses across the North West took part in the tournament and together raised £4000 for HideOut, a state-of-the-art Youth Zone, set to open in East Manchester in Spring 2020.

The competition was tough and the team from EY eventually beat PwC in the final and emerged as the winners.

Every penny raised at the tournament will go towards supporting Manchester’s young people to lead healthier, happier, more aspirational lives.

HideOut Youth Zone is currently under construction in Gorton, East Manchester. Once open the state-of-the-art facility will provide young people aged 8 to 19, and up to 25 for those with additional needs, with access to over 20 activities every night.

GCA Altium is planning various further activities to raise funds for HideOut Youth Zone and has committed to long-term support of the charity by becoming a Founder Patron.

Phil Adams, CEO of GCA Altium, said: “The football tournament served to bring together the local business community to support OnSide while also having a good time. We are deeply committed to supporting this life-changing project and are planning a number of further events to raise funds. Thanks to all the teams who came along on the day and contributed to supporting the young people in our community.”

Adam Farricker, CEO of HideOut added: “ A huge thank you to GCA Altium for hosting this fantastic football tournament which brought together businesses from Manchester and beyond in support of the city’s young people. It is with thanks to the incredible support from businesses such as GCA Altium that HideOut Youth Zone will open with a first class offer in Spring 2020, their Founder Patron support will benefit thousands of young people for years to come. ”

HideOut Youth Zone is part of national charity for young people OnSide Youth Zones, which has 13 state-of-the-art centres across the country including several in Greater Manchester.