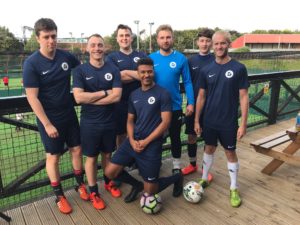 The annual tournament showcased the wealth of software development talent in the north-west – and their agile skills on the pitch. Godel took the 2019 trophy home as winners.

The Kanban Cup, named after an agile software development methodology, took place at Powerleague Ardwick and included 14 five-a-side teams of coders from some of the region’s finest tech-driven companies. 98 software developers were involved with the event (each team brought seven players along on the night).

“The Kanban Cup saw the mightiest of the keyboard kings all bring their best to play for pride and charity. N Brown Athletics were the Icarus of the tournament, flying high above the competition until flying into the hot sunshine of the Godel team.” said Adam Warne, CIO at N Brown, who were the runners up at the event.

Paul Green, chief commercial officer, Godel said: “What a fabulous turn out and a great tournament hard-fought, and all for an amazing cause.”

Adam Farricker, Chief Executive of HideOut Youth Zone said: “A huge thank you to Godel Technologies and all the teams who took part in this year’s kanban cup tournament. It was incredible to see how many Manchester-based businesses came forward in support of the city’s young people. By this time next year, there will be hundreds of young people enjoying football tournaments and much more inside the new state-of-the-art HideOut Youth Zone, which has only been made possible with thanks to the local business community”.