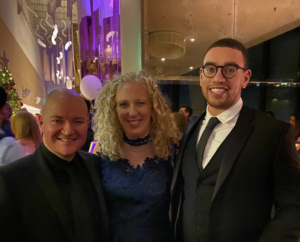 Over the past 6 years, The Manchester Ball has generously chosen the recently awarded ‘North West Charity of the Year’ Manchester Youth Zone as its beneficiary charity and has raised an astonishing £192,580 for them, including last year’s contribution to the development of their ‘Junior Choices’ programme. Junior Choices is a ten-week preventative programme designed to target young people vulnerable to child exploitation, using positive role models, sports, arts and adventurous activities to achieve this.

We were thrilled that for 2019, The Manchester Ball decided to extend its support to the latest Youth Zone in the city – opening in Gorton in 2020, HideOut Youth Zone.  The night was a rousing success and a huge £53,000 was raised on the evening to be split evenly between the two Youth Zones, ensuring thousands more young people across Manchester have somewhere to go, something to do and someone to talk to. The benefits of this event reach far beyond the monetary donation – and both charities acknowledge the huge value in the awareness and profile raising and relationship building element too.

Adam Farricker, Chief Executive of HideOut Youth Zone, said “It’s a real honour to be supported by The Manchester Ball and join the long list of charities they have supported over the last 32 years. HideOut Youth Zone couldn’t open it’s doors without the support of the Manchester business community so it was fantastic so see so many organisations and individuals coming together to show us they’re in our corner!”

Paul Chorlton and Phil Derbyshire, organisers of The Manchester Ball, said “It is a huge honour to host The Manchester Ball, and to receive such fantastic support from local businesses and individuals. We would like to thank everyone who has helped make this year such a fantastic success. It has been an honour to play a small part in supporting young people to shape and fulfil their potential.”

Richard Marsh, Chief Executive from Manchester Youth Zone, said “We cannot thank The Manchester Ball enough for their phenomenal support of young people from across Manchester and a huge thank you to all of the supporters from the local business community, whose support on the evening really will help to change the lives of young people.”

The evening saw two brilliantly talented young people from Manchester Youth Zone perform – adding to the entertainment on the night and providing them with the fantastic experience to sing in front of an audience of over 340 people, at aged just 14 and 17.

Every penny raised goes directly towards providing Manchester’s young people with somewhere safe and inspirational to go in their leisure time.

We are always seeking the support of those who love Manchester and want to make a positive difference in the City, whose endorsement and generous support will truly help us change the lives of young people.