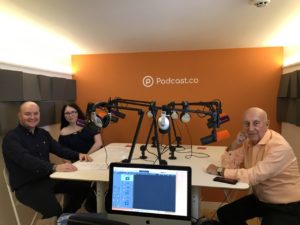 Manchester business leaders, including serial entrepreneur Fred Done, are set to reveal their secrets for success and how they have been influenced by the city of Manchester in a new podcast series hosted by local young people.

‘What Manchester Taught Me’ is a brand-new series developed by youngsters who are assisting with the creation of HideOut Youth Zone, a £6.6 million state-of-the-art youth centre due to open in East Manchester in the spring of 2020.

Each patron has pledged £25,000 over a minimum of three years to support the Youth Zone’s £1.3million annual running costs.

Fred Done has provided £6 million for the construction of the Youth Zone which is being delivered in partnership with national charity OnSide Youth Zones and Manchester City Council, which has contributed £1.5 million capital funding towards HideOut’s creation as well as contributing to the running costs.

The state-of-the-art Youth Zone will provide those aged 8-19, or up to 25 with additional needs, with access to high-quality facilities and services, 7 days a week.

The podcast series will allow listeners to get to know the charity’s supporters, delve deeper into their ties to Manchester, uncover their tips and tricks for success and find out what inspired them to give back and support Manchester’s new Youth Zone.

The first podcast has already been created, with Fred Done discussing why Manchester is still so important to him and his businesses, his admiration for Muhammad Ali and Nelson Mandela and his secrets for success.

Adam Farricker, Chief Executive of HideOut Youth Zone said: “Our brand-new podcast series gives young people a platform to develop new skills while interviewing some of the city’s most influential and successful businesspeople.

“We’re looking forward to learning more about what they feel makes the city special to them and seeing what kind of reception it receives.”

Fred Done, Founder of Betfred, said: “Taking part in the podcast was a fantastic experience and it was great to be able to share ‘What Manchester Taught Me’.

“I’m delighted to be supporting HideOut Youth Zone and helping to provide a safe and enjoyable place for young Mancunians to learn and grow.

“I encourage any company considering supporting the Youth Zone to do so and help make a difference to young people’s lives.”

James Mulvany, Founder of Podcast.co said: “At Radio.co and Podcast.co, our aim is to help brands, entrepreneurs and organisations to tell their story using audio. When we heard about HideOut Youth Zone and all of the interesting people involved in bringing this charity to life, we knew it would make a great story which deserved to be shared.”

Currently under construction in East Manchester, HideOut Youth Zone will provide 3,000 young people per year with somewhere to go, something to do and someone to talk to.

HideOut is part of the national OnSide Youth Zones network, which has 13 state-of-the-art centres across the country including several in Greater Manchester.

It will offer a range of services for young people including counselling, mentoring, employability and enterprise programmes, days out and holiday clubs as well as over twenty activities seven days a week.